Today I tried to define a custom load balancer probe on a worker role in Azure. On this worker role, IIS and other components were installed and configured using PowerShell scripts.

After the deployment, I wasn't able to reach the website, why is that? I jumped onto the machine using Remote Desktop and took a look at IIS logs... Empty, nothing, no sign of a probe here...

The probe was configured to listen on port 18045 in my service definition file, which is also what I saw in IIS. 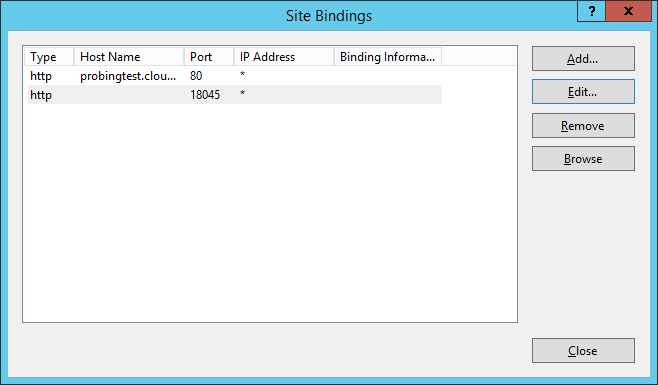 On the machine itself I tried to make the same call as the load balancer, by IP address.

Interesting. Something is really messing with this port when all IP addresses are configured in the binding. After several tests I realized that the Windows Azure Guest Agent windows service prevented communications on the IP address when the IIS bindings in the following format "*:18045:". This translate to the following binding in IIS

How does it looks now?

We needed to explicitly set an IP address instead of * like we were doing.

I grabbed the IP addresses by using the following command in PowerShell:

I ended up with this in IIS:

After redeploying, everything started to work as expected with the custom probe.

What is PSReadLine It's someone at work that told me about PSReadLine. I just took me 5 minutes to realize that this module is a life changer for everyone doing serious PowerShell. Here is what is does This module replaces the command line editing